the workshop of charles g. waugh
Or, more accurately, my playroom

tools, tools everywhere!
I began collecting tools when I was thirteen, and played with them since I was old enough to drag Dad's favorite hand-plane out to the sandbox. It make these beautiful roads for my Matchbox cars! And, being but a child, I neglected to bring it in before winter, so it was a mass of rust and sand come spring.

My father always said it was cheaper to buy tools than toys, but I'm not sure he was adding in the emergency room visits. My left hand has three significant scars on it, all collected before my 6th birthday. But... that's how we learn! (Albeit slowly in my case) 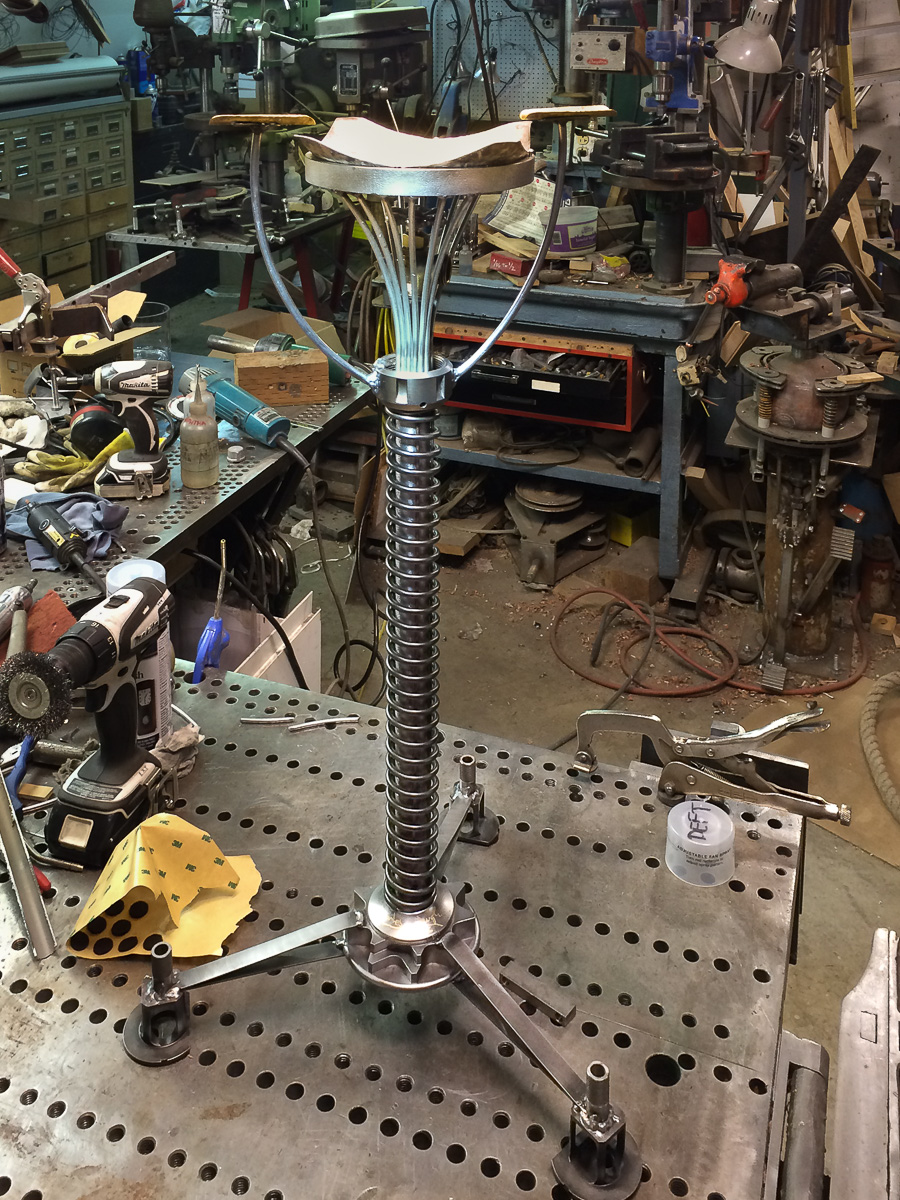 A smoking stand in progress on my lovely and beloved welding bench
the big disk sander project
I have been desiring (lusting?) to have a big disk sander for quite a while, but they are too high priced and run too fast for my liking (that leads to burning the stock, which ruins the abrasive paper on the disk) so I wanted one that runs sloooow. Plus I wanted a feature that NONE on the market have... (see video for details)

The video below shows the start of building my new baby. The gestation period looks to be about 6 months at this point. I will be adding more videos to the section as I progress on building this MONSTER:
the positionall
Sculptural art often requires holding the work at various unusual angles. And it has to be solid, quite solid to put up with banging, carving, wrenching, welding, etc.

After many years of frustration trying to clamp things this way or that way and spending a lot of time re-orienting things between cuts, I decided to design something to sure that problem.

Having spent 15 years designing products, machinery, and processes in a manufacturing facility, I knew how to do it, so I dove in.

What I do at first on most design projects is build a proof-of-concept. That is, I hack together something that answers the question: Will this idea almost work?

The video below shows my proof-of-concept that I had hacked together out of miscellaneous crap I had tucked in corners gathering dust:
Once I knew that it would work, I began to refine it and clean it up. It's now designed in 3D CAD and I've had one set of prototype parts cut for it, and am in the middle of debugging the prototype design so I can move it into manufacture at some point.

It's called the PositionALL and it even has it's very own place-holder-really-doesn't-do-anything website:

contact
Charles G. Waugh
cw@charleswaugh.com
503-663-1513 ext 4
Yes, that's my Portrait Studio's phone
and it tracks me down anytime, anywhere
response form thingy
Shazam! I'll buy that stock right away!
Or, I might just be in touch as you requested
Oops! Something got left out (like the stock tip, maybe?)     :-)
Copyright CW Designs, Inc. 2017